COVID-19 health and safety protocols in place. We will take all necessary precautions to ensure your safety.

Stages Of Elderly Bedsores And How To Prevent It 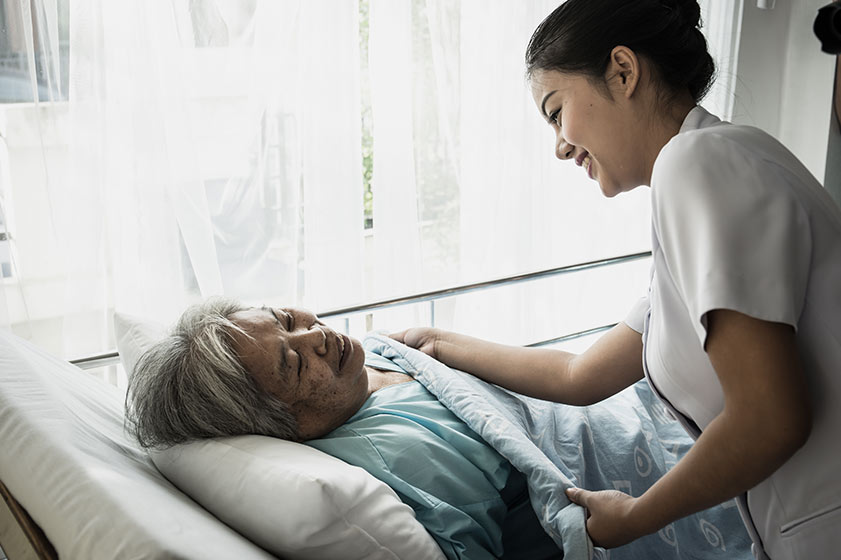 According to the Centers for Disease Control and Prevention, about one in 10 elderly suffer from bedsores, otherwise called pressure ulcers and decubitus ulcers. Bedsores refer to an area of the skin that is damaged due to long-term pressure, which reduces blood flow to the area. As older adults who just underwent surgery have less mobility, they are at a higher risk of developing bedsores. Naturally, these bedsores tend to appear on parts of the skin with less muscle and fat, such as the tailbone, shoulder blades, elbows, hips, and heels. To find out how to identify the various stages of elderly bedsores and the ways to prevent them, continue reading.

Bedsores can be easily treated during the early stages, so you or a caregiver should keep a lookout for them every once in a while. Listed below are four stages of bedsores:

During the first stage, bedsores appear as a discolored patch of skin and are warm when touched. Older adults with lighter skin may see it as red, while older adults with darker skin may identify it as purplish-blue. Some loved ones may even be irritated by itchiness and a burning sensation. Regardless, at this stage, bedsores are relatively minor and can be treated with pressure relief and constant movement.

For the second stage, the patch of skin is visibly damaged and may even come in the form of an open blister or wound, alongside discoloration. In this stage, some older adults may have already felt pain or discomfort.

Alongside the discoloration and abrasions, bedsores in the third stage appear crater-like that extends deeper into the skin.

In stage four, which is the last stage, bedsores are prominent as a large, open wound. In addition, the skin around the area is significantly damaged. In some extreme cases, bones, muscles, and tendons can even be visible through the injury. A stage four bedsore is incredibly dangerous, thus should be immediately treated by professional medical personnel or caregivers.

How to Prevent Bedsores

Bedsores are not inevitable. As such, there are ways to reduce the likelihood of your loved ones getting bedsores, including the following:

Considering that bedsores in the early stages can be treated, it’s a no-brainer to check up on your loved ones frequently to ensure that no bedsores are developing. During this stage, such bedsores are also much easier to treat, and can be overseen by a non-professional, be it you or a family member. While your loved ones may feel uncomfortable or even humiliated being inspected, it’s important to remind them that it’s necessary for their health and well-being.

In general, a well-balanced meal and an active lifestyle is the key to receiving a better quality of life. If your loved ones are overweight, they are more likely to suffer from bedsores due to added pressure on their bones and joints. What’s more, a good diet helps promote strong bones and skin, which decreases the risk of bedsores. As for exercises, even light fitness activities such as stretching can increase blood flow in the body.

How To Find A Pet-Friendly Retirement Community
May 21, 2022

A Guide To Relocating After Retirement
May 13, 2022

5 Intergenerational Activities To Do With Your Grandkids
May 5, 2022

4 Grandparenting Tips For Building A Strong Relationship With Grandkids
May 1, 2022
Blog Categories
Go to Top
Schedule a Tour
Contact Us