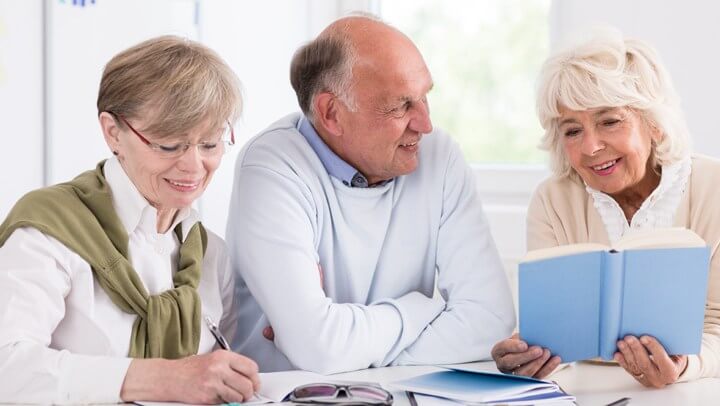 It is completely normal for people to experience memory lapses as they age. Often people think they have lost their memory completely but can actually remember what has been forgotten a short time later. Significant memory loss is not an inescapable part of aging; nevertheless, brain health is greatly impacted by daily activities, health habits, and lifestyle choices.

It is not uncommon for the region of the brain which forms and retrieves memories to deteriorate with age; that region of the brain is called the hippocampus. Proteins and hormones that stimulate neuron growth, repair, and protect brain cells may also decline with age. Finally, the ability of the brain to absorb brain-enhancing nutrients is less efficient among the elderly. Here are six ways to sharpen the mind:

It is important to take steps that allows oneself to prioritize the use of mental energy. For instance, always putting the keys in the same place will limit the time and mental capacity of trying to figure out where the keys are. One should consider doing the same for all frequently used items such as glasses, purses, and/or wallets to help improve mental health. Even writing reminders about upcoming events on calendars and in planners can help free up one’s mental capacity.

A common saying is that repetition is the mother of retention. If someone has a thought, reads something important, or hears something that needs to be remembered, it is extremely beneficial to write it down or repeat the information out loud. These actions reinforce the storage of short-term memory into long-term memory. When meeting new people, a great practice is to repeat their name, such as, “Hi Henry, nice to meet you.”

Engage all of the Senses

When the brain receives new information, the more of the brain that is involved, the easier it will be to retain the memory. Studies show that smell powerfully enhances memory. In a study conducted by Utrecht University, when emotional images were presented along with a fragrance or smell, people’s memory recall was much improved. It was discovered that smell is a stronger trigger of arousing memories than music, which has often been held to provide equally powerful triggers as smell.

Maintain a Positive Belief in Yourself

Negative stereotypes about oneself and limitations that occur in old age are often major contributors to failing memories. When seniors don’t believe, they don’t have any control over memory function and are more likely to become victims of cognitive decline. To help improve the sharpness of one’s mind, simply believing that it is possible can improve brain functions.

Better cognitive ability in seniors is commonly associated with attaining a higher level of education. Experts say advanced education can help keep memory sharp because it helps to keep seniors in the habit of being mentally active. Pursuing education is significant because it requires mental pursuits. For example, any pursuit that is job-related, education-related, or produces better results as far as maintaining cognitive ability is better than being involved in a hobby, volunteer work, or similar activity. Conservatory Senior Living offers a continuing learning class called “Discovery University” for its residents at no additional cost.

There are things that people put in their bodies that limit the amount of oxygen getting to the brain, causing it to operate at less than full capacity. Smoking has this effect and so does eating certain foods. Human body cells naturally lose their ability to carry oxygen as people age, which is why it’s important to choose foods that do not contribute to oxygen depletion. The following foods use more oxygen than they provide: hamburgers, processed sugar, white flour, pizza, and French fries. Anyone who eats these foods should offset the ill effects by also eating vegetables and fresh fruits daily.

It is completely normal for people to experience memory lapses as they age but it is possible to help reduce those lapses with several simple and easy steps. Conservatory Senior Living is designed with these factors in mind and provides continuing education programs, fine dining, and a stress-free environment to keep residents healthy in both body and mind.